On January 26th (2017), Saturn left the constellation of Scorpio and moved into Sagittarius. This is according to the Sidereal Zodiac used in Vedic astrology. Saturn will go retrograde during the first week of April, which will take him back into Scorpio on June 20th. Then October 26th, after having gone direct once again, Saturn will move back into Sagittarius and will remain there until January 23rd, 2020.

What does this mean for all of us? Well, to put it most simply – a shift or change in terms of individual as well as collective themes unfolding. Saturn moves into a new sign approximately every two-and-a-half years, teaching us his valuable lessons every step of the way.

One of the reasons why Saturns transit is regarded as so important in Vedic Astrology is because Saturn is the slowest moving of all of the “Nine Grahas” (or planets) we use in this system. So his transit indicates relatively long-term effects. In whatever house he is transiting relative to our natal chart, his influence will be felt for about 2.5 years. In contrast, the Sun, Venus and Mercury stay in a constellation for about an month or so, the Moon for about 2.5 days, and Mars for about 1.5 months.

Joining Saturn in the category of “slower-moving grahas”, thereby giving longer-term results in transit, are Jupiter and the Lunar Nodes, Rahu and Ketu. Jupiter graces whatever constellation he is in for about a year, while the nodes take about 1.5 years to transit the same amount of “cosmic real-estate”.

So what does this transit of Saturn mean specifically for you? Well, this depends on the over-all “lay of the land” in your natal chart. Thus, it is a good time to receive an astrological “update” from your Vedic Astrologer of choice.

One interesting consideration to note about this transit is that Saturn is now beginning its journey of transiting over the ascendant of the “birth chart” of the United States. Saturn will pass right over the ascendant point of this chart (9:45 Saggitatius) January 22nd, 2018. Then Saturn will retrograde back over this point July 26th 2018, again crossing this point going direct October 16th.

So over the next few years, we may see a kind of “reality check” happening collectively for our country with a lot of re-evaluating in terms of who we are and where we are going as a country. There may be some tensions peaking around the times that Saturn is especially close to the ascendant point with things hopefully smoothing out as Saturn moves further away. These happenings can ultimately result in a change in the way the country is viewed by the rest of the world. 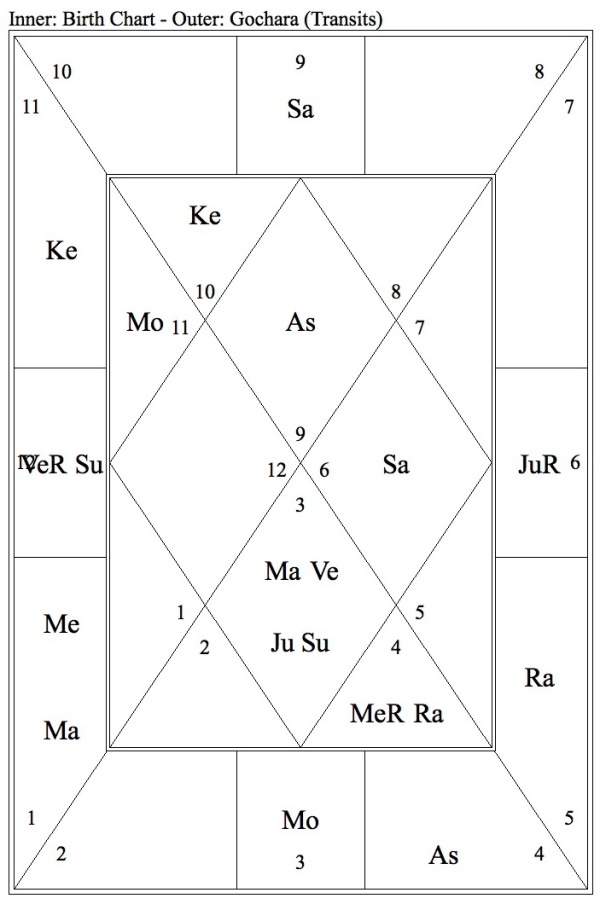 Above: the “Birth Chart” of the USA – the moment the Declaration of Independence was signed. The outer layer shows the current transits as of 4/2/17 (note Saturn is transiting over the Ascendant in the ninth sign of Sagittarius).